The production was presented by The Bald Theatre of the Department of English Language and Literature of the Aristotle University of Thessaloniki, in collaboration with Persona Theatre Company, during the “Student Week Festival” at Aneton Theatre, in April 2008. Ιt was performed in English.

In this staging of the play the choice was to emphasize the atmospheric touches of the play, to reach for visual and aural equivalents for the characters’ broken existence, and at the same time turn inwards and explore the fragmentary world that these people carry within them.

The production follows and traces Williams’ figures in their oscillation between reality and fantasy, in their ever changing masks, in the bits and pieces they scatter around and then patch back together in order to give themselves flesh and blood. The actors on stage alternate in their roles, contributing their own uniqueness to the characters, by building on and/or deconstructing the stereotypical conception and representation of Blanche, Stanley, Stella and Mitch, who ultimately blur all mirror reflections, refusing solid identities and singular names.

The multi-cultural, multi-lingual make-up of group allowed students from different countries bring in their own feeling of the play and breathe life into Williams’ world under dim shafts of lighting and pervasive nostalgic tunes.

* The production was presented at the English-speaking venue “Velico Arts Centre” in Velico Turnovo, Bulgaria in May 2008. 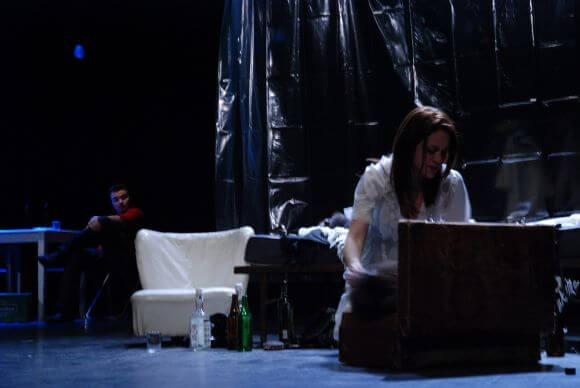