There is not one single reading of Hamlet; Enter Hamlet is a multimedia piece for one actor, a play of ghosts, by whom the titled hero is surrounded and whom he is both running away from and chasing after. The plot centers around Hamlet’s quest for peace and a sense of belonging, as he is recollecting the main events of his life, in constant dialogue with his past. The character moves from place to place –a train, a deserted city square, a ballroom—among others, where he meets with random people, variously identifying in them family members, friends, lovers and rivals, as he moves forward towards an inevitable end. The illusion of movement and progression is captured in a series of fleeting visual impressions, while Hamlet becomes a lens through which we experience the intensity of familial betrayal, insatiable sexual desire, self-sabotage, relentless introspection and a refusal to let go. Whether Hamlet is a depressed good-for-nothing, an intellectual visionary or a whimsical (anti) hero is not the really the issue here: he morphs from one persona to the other, a victim and a victimizer, in his wavering between utopic delusion and pragmatism. Building on the existentialist outlook of the original, the play contemporizes its perennially philosophical interrogations, and also features an episodic structure with a pseudoAristotelian ending, clearly suggesting that where one sees an end, one should also trace beginnings.

The solo multimedia production by Athens-based Persona Theatre Company brings one actor right at the middle of the stage, enclosed in his past memories as represented by three screens, projecting key moments of his life as well as landscapes of the title character’s mind. These places –remembered, imagined and anticipated— are gradually taking over and Hamlet is swept into this world of ghosts, which he finally embraces in an act of (intermedial) catharsis.

A vocalist accompanies the actor performing Hamlet onstage, embodying—through experimental controlled improvisations— the wide range of characters, thoughts and visions with which the protagonist is in constant dialogue.

Andromachi Montzoli, costumier “Σημεία όψης” and “Imera Theater” for the warm hospitality and support
Michael Demetrius and Sophia Papachristou for the photo shooting
Gianni Barabaschi for the wood works

Enter Hamlet, translated enter Hamlet, is the title of the play that opened the Verona Shakespeare Fringe Festival at the teatro Camploy on Tuesday, 23rd August.  The debut performance, entirely in English, was staged by the Persona Theater company. Avra Sidiropoulou, director of the Greek Theatre Company, was present on stage to direct the opera she conceived.

To put us in direct contact with the English dramatist is the Skene center of the University of Verona together with the municipality. “I think it's an opportunity, both for the University and for the people of Verona, to see how Shakespeare continues to speak to us in so many different languages and cultures. Coming to attend the shows can, of course, give new incentive for the world in which we live”, explained Silvia Bigliazzi, director of the Skene Research Center.

Enter Hamlet faces Hamlet's torment through a re-enactment of ghosts from the past. Elena Pellone, the only protagonist at the center of the scene. The actress moved in the minimal set design composed of cubes dislocated on stage and moved from time to time to combine the monologue with the body language. Her movements on stage are only an illusion of progression, the harsh reality faced is another. That of a continuous introspective wandering, which investigates the uncomfortable aspects of the life of the hero and of all of us: family betrayal, sexual desire, self-sabotage, the refusal to let go. The installation of three screens behind the actress produced an evocative effect thanks to the images shown. The projections, often provocative, allowed a continuous reference to the memories of a life made of meetings with family, friends, lovers and rivals. Experimentation with different types of language and expression is among the distinctive elements of the Greek Theatre Company. The music of Alessandra Bonetti is also emblematic. With clarinet, bassoon and flute, the musician has masterfully punctuated the existential questions of the Shakespearean hero. Where an end is seen, it is also essential to see the beginnings. It is a meaning, but not the only one, that can be attributed to the show. 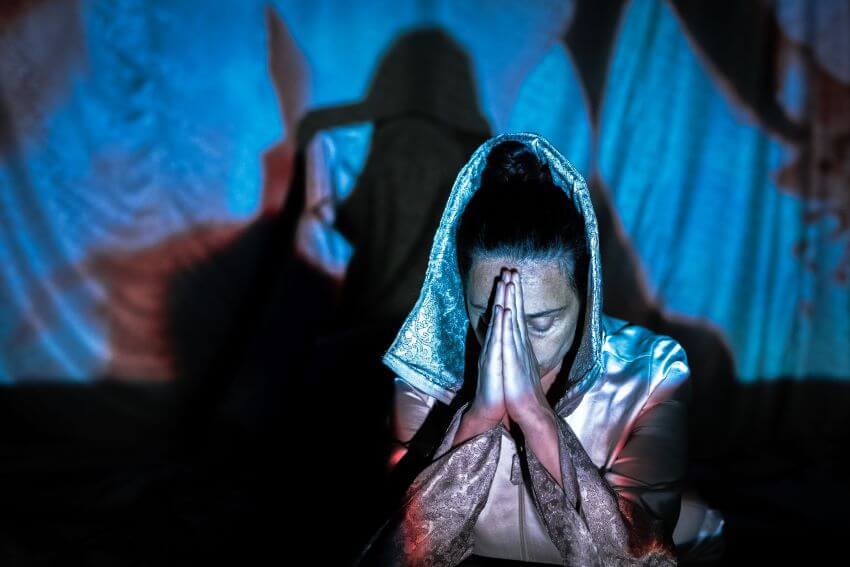