Phaedra I—, written and directed by Avra Sidiropoulou and produced by Persona Theatre Company premiered at Tristan Bates Theatre in London, where it played to full houses for nine performances in February 2019.

The project is a solo multimedia portrayal of a modern-day Phaedra, the legendary wife of King Theseus, who falls hopelessly in love with her young stepson, Hippolytus. In this version, she bears all the ambiguities of a restless, contemporary woman, who oscillates between the desires of the flesh and the attraction to the void, as she suffocates in her socially imposed roles within the ruins of a decaying metropolis.

The production’s use of 3-D mapping, video projections and minimalist aesthetics yields a highly poetic visual trip through Phaedra’s stations of personal and public history. The performer embodies all the characters of the ancient myth passed onto us by Euripides, Seneca and Racine. Taking on their speech, Phaedra is also in constant dialogue with her digital selves, becoming Aphrodite, Theseus, Hippolytus, the Chorus and the crisis-ridden City itself. Struggling to escape the existential fatigue that plagues her, she ultimately emerges as a palimpsest of voices, images and memories.

With the kind support of THE J. F. COSTOPOULOS FOUNDATION

Era Journal: UCL Arts and Culture
“This innovative staging was subtly reminiscent of the static nature of Greek tragedy – in Greek tragedy, famous for its rigid and strict dramatic conventions, action never happens onstage and is merely reported. Phaedra I— mirrored this convention through Elena Pellone’s Phaedra relating all the action of the play directly to the audience, narrating the events directly to us. In this way, it was also reminiscent of Greek narrative performances, in which Homer would be read aloud to an audience.”
“This short, punchy drama certainly left an effect on the viewer, and it was a beautifully crafted production. Elena Pellone masterfully created and sustained various voices throughout the piece, and shifted seamlessly between them all, creating an ethereal and uncanny feeling for the audience and recreating the magic of Greek tragedy in a wholly modern way.”

Emine Fişek
Assistant Professor of English Literature, Bogazici University, Istanbul, Turkey
Avra Sidiropoulou’s Phaedra I— revisits a question that has puzzled generations of directors, playwrights, and actors since Euripidies and Seneca’s depictions of the mythological Queen of Athens: How to understand the relentless passion that drives Phaedra’s desire for her stepson, Hippolytus? Is Phaedra’s expression of this desire an act of agency? Or is Phaedra’s passion fed by a prophecy that destroys her willpower? And what does Phaedra’s journey mean for the citizens of Athens?
Phaedra I pulsates with the urgency of these questions and explores their contemporary resonances, thinking through the thorny relationship between agency, desire, and consent. Throughout, solo performer Elena Pellone’s body becomes the literal surface onto which these questions are projected, with images of a dry, suffocating metropolis and mountains of uncollected rubbish suggesting an all-too-familiar sense of collective, millennial ruin. Ultimately, Phaedra I asks the difficult question: where do we stand in relation to this story of unfettered hunger? 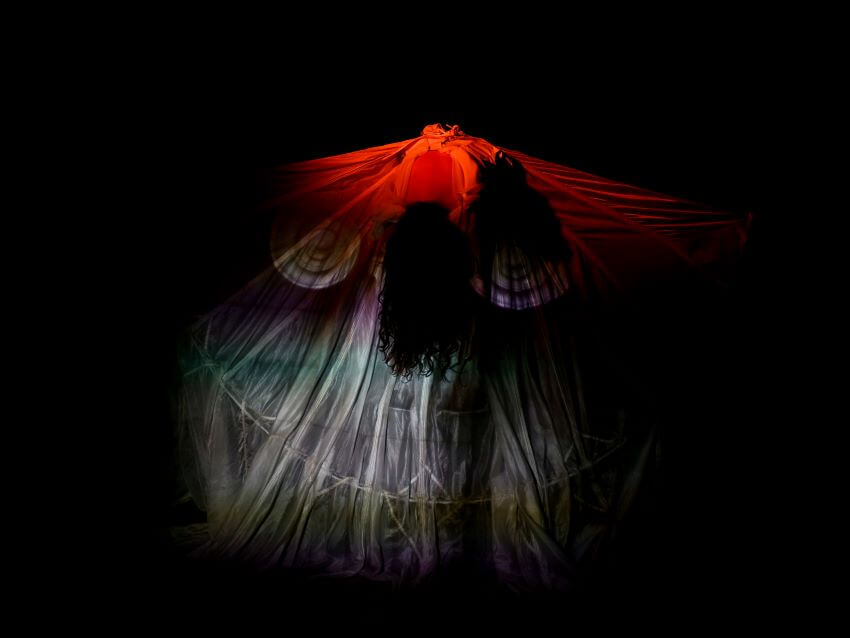